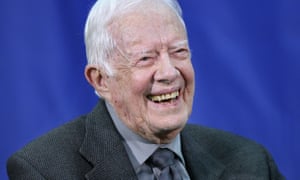 Former president Jimmy Carter has changed his mind about the world’s greatest problem, he told graduates during his commencement speech at Liberty University on Saturday.

“I think now it’s a human rights problem, and it is the discrimination against women and girls in the world,” Carter said during his address at the university in Lynchburg, Virginia.

The former president touched on issues from female infanticide to sex and human trafficking to the astounding number of sexual abuse incidents within the US military (Carter cited 16,000 cases a year, though according to recent data, the number of reports filed last year was closer to 6,700).

This isn’t the first time Carter has spoken out about this issue. In a 2015 TED Talk, Carter pointed to the mistreatment of women and girls as the most serious global human rights abuse. He discussed how harmful cultural attitudes, many stemming from interpretations of religious texts, are often the root of the problem, and he also shed light on forms of gender-based violence, including honor killings and female genital mutilation — which has affected more than 200 million girls and women alive today, according to the World Health Organization.

Until the stubborn attitudes that perpetuate gender discrimination change, the world cannot advance, and what Carter had previously thought was the world’s greatest challenge — income inequality and poverty — cannot be solved.

More than 130 million girls are out of school, according to UNESCO and over 650 million girls and women alive today were married as children, according to Girls Not Brides. Many of them live in poverty and in communities where girls are seen as a financial and social burden, rather than potentially valuable members of their communities. This means they may be pulled out of school to collect water, care for their family, or to free up funds to prioritize opportunities for male family members.

As a result, millions of girls miss out on a chance to realize their full potential and are made dependent on others, trapping them in the poverty cycle.

Carter’s commencement speech on Saturday helped highlight these issues, and underscored the need to reevaluate how the world treats half its population.

Global Citizen campaigns in support of the Global Goals, including for gender equality and the advancement of women’s rights. You can take action here to empower girls and women around the world.